This spring Habitat for Humanity of Hillsborough County hosted its first “Women Build” event. The eight-week construction event attracted 130 women volunteers from our community to come together to build a home for a Tampa mother of four, which will be completed in mid-June. 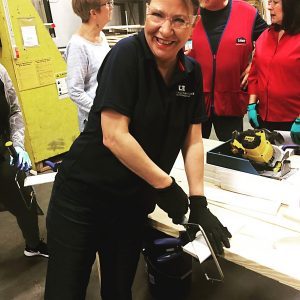 Before construction on the Women Build house began, Lowe’s Carrollwood Store Manager Scott Roether hosted a Women Build “How-To Clinic” on April 20th for the women volunteers to familiarize themselves with power tools. “The women who attended learned so much from the How-To Clinic and felt more confident for the start of the build,” said Melissa Jay, Habitat Hillsborough Vice President of Resource Development. “We are so thankful to Lowe’s for their enthusiastic support of our Women Build.”

In addition to the clinic, the Lowe’s Carrollwood store had a team of ten women volunteer their time and skills on the Habitat Hillsborough construction site on May 9th as part of Habitat’s “National Women Build Week.” The team spent the day working on interior framing.

Lowe’s relationship with Habitat for Humanity International has helped to build hundreds of homes across the United States. Since 2004, Lowe’s has been the national underwriter of Habitat’s Women Build program, contributing millions of dollars and countless hours of volunteer support to Habitat for Humanity.

Construction Underway on Habitat Home to be Built by 130+ Women

The Difference Between Happiness and Joy
Scroll to top