Our Habitat for Humanity mission has been fortunate to receive tremendous help from a special group of volunteers who are themselves guided by mission.

Since Veteran’s Day, nearly 100 veterans from The Mission Continues have volunteered on the Habitat for Humanity of Hillsborough County build sites, helping with varying phases of home construction for several local families.

Established in 2013, The Mission Continues (TMC) is a national nonprofit, non-partisan organization dedicated to empowering military veterans adjusting to life after military service to find purpose through community impact. The Mission Continues deploys veterans on new missions in their communities, so that their actions will inspire future generations to serve. TMC brings together veterans and nonprofit partners like Habitat Hillsborough who have similar 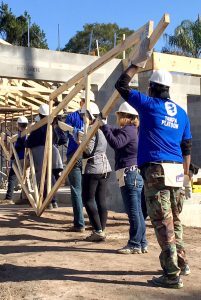 missions to assist families and individuals in our community.

Our relationship with The Mission Continues began after hiring a military veteran last spring. In April 2017, TMC fellow Nitza Rivera joined our staff as Procurement and Grant Compliance Manager, a position that assists Habitat’s construction department as the affiliate increases its home building capacity. Nitza was Tampa’s first service TMC platoon member. Her involvement in The Mission Continues created a natural bridge between the service organization and Habitat since both have similar missions to create transformational change in the communities they serve.

“The heartbeat of Habitat has always been its volunteers, so Habitat Hillsborough is especially grateful to partner with these veterans who have given so much in service to our country and continue to give of themselves to make a difference for families in our community,” said Nitza.

Continuing Partnership with The Mission Continues
Our first TMC volunteer team arrived on Veterans Day 2017 as part of a service project that also included a team from Wounded Warrior Project. Nearly two months later, TMC was back on our build sites. In honor of Dr. Martin Luther King Day of Service, 20 volunteers from the TMC Tampa Platoon came out to our Brandon build sites to help us raise the roof trusses on homes for three families.

Most recently, in honor of Women’s History Month, The Mission Continues commissioned a “#HerMission” service project to celebrate the skills and expertise women veterans bring to TMC communities. #HerMission included a team of 30 women veterans from the Tampa, Broward, Miami and Orlando First Platoons who helped Habitat Hillsborough put the finishing touches on the Williams family home in Plant City. 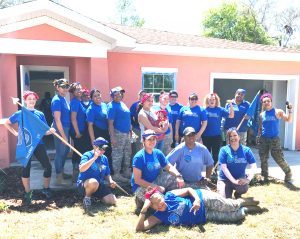 One of the #HerMission volunteers, Laura Hartman, is reflective of her involvement with TMC and her recent experience on the Habitat build site. “If we can roll out in a lead gun truck in 2005, we can lay sod and build a house in 2018,” said Laura. “Warriors don’t return home to a system, they return to a community and that is what TMC continues to build. It helped me build a family where I live and this weekend was all about being with my sisters! Home is walking into a house of 22 female warriors and feeling connected. I didn’t know them walking into the house, but it’s this weird unspoken bond that we have that keeps us united. We are leaders, no outside noise mattered, except the mission at hand. We are meant to lead the next generation of women warriors.”

“All of us at Habitat Hillsborough are so very excited and appreciative to have the ongoing help of The Mission Continues,” said Nitza. Working on our build sites with members of the Tampa Platoon, as well as other Platoons from around the state, is an invaluable asset and an honor.”

You can find more info on The Mission Continues at www.missioncontinues.org